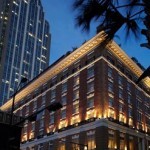 Originally built in 1852 and closed in the mid-1970’s, The Battle House Renaissance Mobile Hotel & Spa in Mobile has been restored to all its original grandeur.

The Battle House reopened in May 2007 and has been named as one of the “Top 500 Hotels in the World” by Travel + Leisure in 2009. The hotel has also been named one of National Geographic Traveler’s “Top Places to Stay” in North America and was named a favorite by Coastal Living.