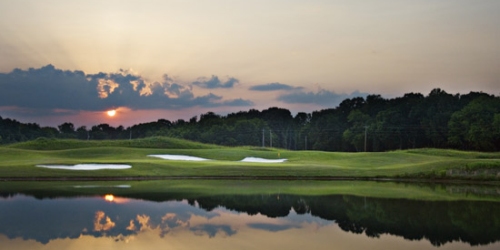 The Robert Trent Jones Golf Trail at The Shoals is home to two 18-hole championship courses and lies between the Wheeler and Wilson dams on the Tennessee River. Wheeler Dam is named in honor of General Joseph “Fighting Joe” Wheeler – the only Confederate General to attain the same rank later in the United States Army.

The Fighting Joe course at The Shoals was the first Trail course to break 8,000 yards. Travel + Leisure Golf named Fighting Joe one of the top new courses in 2004. The second course, the Schoolmaster (named for President Woodrow Wilson who was responsible for getting Wilson Dam built and was also known as “The Schoolmaster” of politics), opened in the Summer of 2005.

The Fighting Joe course is long, really long, and this links style course is simply good straight-forward golf. Some say the spectacular 17th hole is the signature hole on the course, but the 18th green overlooking Wilson Lake on the Tennessee River will distract you with its beauty, if not its treachery.

The tree-lined Schoolmaster is more traditional golf with every hole keeping with the natural topography along the Tennessee River. It’s wooded, rolling and spectacular. It’s hard to beat the beauty that the par-4 eighteenth hole holds on the high bluffs over the river.